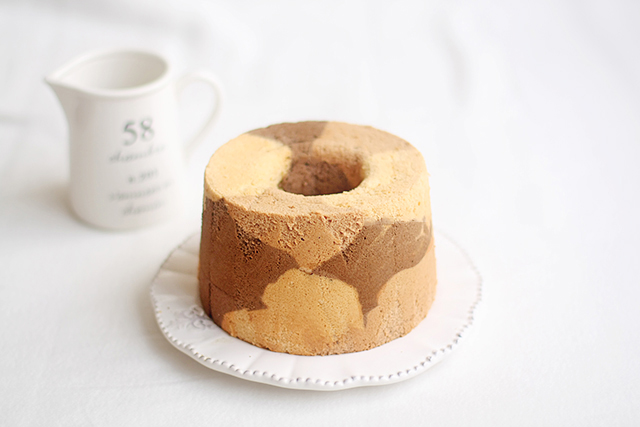 animal print on desserts seem to be the rage these days (tokyo banana, anyone?) and i love incorporating these prints into my cakes as well! do you remember me making cow patterned cookies and leopard print roll cake awhile ago? even though these were basically just chocolate/vanilla marbled desserts in general, it adds a new dimension to the end product. as for this chiffon cake, it was inspired by the tortoise shell patterned coat found on cats. 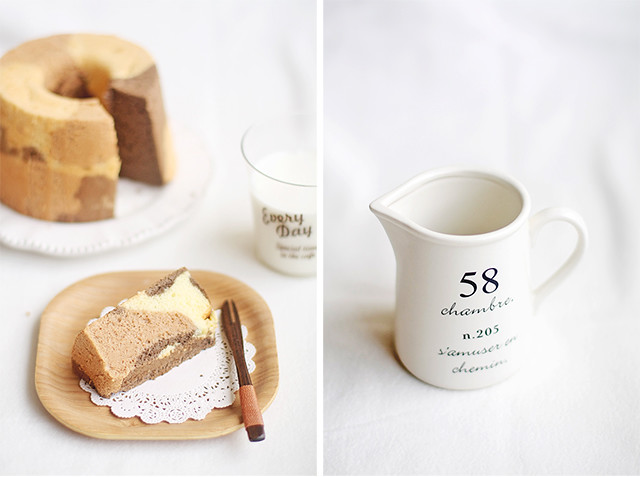 i was doing my usual rounds on youtube watching cooking with dog and this particular video by “cook kafemaru” appeared on my recommended list. i clicked on it and was sold! this channel is owned by a japanese lady and she makes the most amazing stuff! there are so many interesting japanese recipes you don’t need to own a japanese cookbook, ever. theres this fishbowl jelly with swimming goldfish which looks awesome. there are also several bento making videos where she made and brought them to her husband at work. really sweet! you guys should check her videos out if you haven’t already.

as for this chiffon cake, its made using two different types of cocoa powder, the normal kind as well as the black cocoa powder. things like oreo are made using this dutch processed cocoa and yes, its absolutely black. i got it from iherb and it has a really nice flavor. the cake itself is wonderful. its soft and moist with a hint of cocoa and it kinda tasted lighter than the usual chiffon cakes i’ve made. i would definitely make it again. 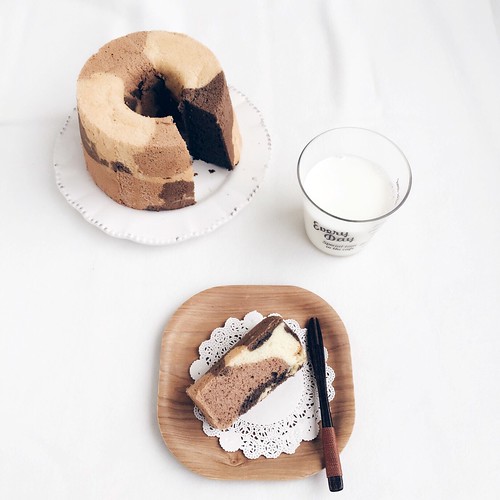 this photo is taken using my phone and i think it portrays a more accurate color (the irony). somehow i cannot seem to get the correct tone on my DSLR and this one comes much closer to the original cake. you can see how dark the black cocoa is. you can also substitute black cocoa with charcoal powder or black sesame would do just fine as well.

this is the video where the recipe is from. in here, the lady does the 3 colors separately by mixing one egg yolk at a time, then add water, oil, etc. i think its too troublesome to have to repeat the process 3 times so i did it altogether by mixing the ingredients for the 3 yolks and then separated the batter into 3 portions. easy peasy. except that mine turned out rather messy because i was using a new chiffon tin which is narrower and taller (the kind that japanese use) and i’ve been on the lookout for the longest time. had problem putting the batter in so i would probably use piping bags next time.