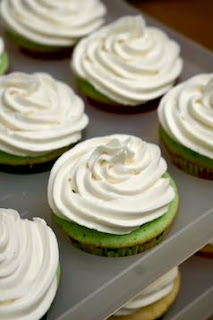 These cupcakes are inspired by the shamrock shake. If you have never tried a homemade version of the shake, check out my recipe for one. It is easy and oh so delicious. 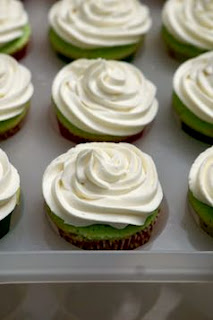 The cupcakes are vanilla mint flavored and topped with a creamy and light whipped cream frosting. The frosting has a bit of cream cheese in it to make the whipped cream more stabilized and keep it shape better. The creamy whipped cream topping paired with the minty cupcake is one delicious combination.

I did not pipe as much frosting on top as I wanted too, because I needed them to fit in my cupcake carrier and if I made the frosting too tall it would get smushed in the carrier. Because of that I ended up having some frosting left, so you should have plenty of frosting to add a fair amount to the top of the cupcakes.