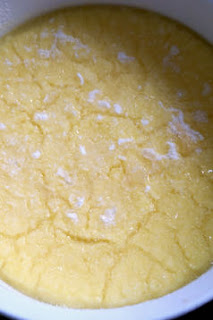 My oldest daughter had to do a project for Spanish, where she had to pick an authentic Spanish recipe, make it at home and write up about it and take pictures of the food. Originally she wanted to make Sangria, I wasn’t necessarily against it, I was surprised her teacher approved her to make an alcoholic drink. My biggest hesitation was, the fact that she would be unable to try the Spanish food she made and I do not like red wine, I’ve tried different varieties, I’ve tried sangria and just don’t like it. So, she decided to make something different and this is what she choose.

Crema Catalana, reminds me of Créme Brûlée with the way it is prepared. It it similar in texture to a pudding with a citrusy taste. I am glad my daughter choose this recipe, because it was really good and I would have never came across this recipe let along tried it without her project.

My daughter did an awesome job making this recipe. I do not have a blowtorch for foods, so she used the broiler on the oven and it would just not brown. It created a crunchy sugar crust that tasted good, but neither of use could get it to brown and I was hesitant to leave it under the broiler any longer than it was already in there. I didn’t have superfine sugar, so she used the food processor and regular granulated sugar, maybe that had something to do with it. Even though the sugar didn’t work they way it was suppose to, we all agreed this was a delicious dessert.