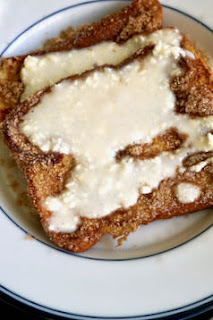 This is not just any old French toast. This takes French toast to the next level starting with the bread. Normally I use Texas toast when making French toast with sliced bread bread, however this uses King’s Hawaiian Sweet sliced bread. The french toast is coated in cinnamon sugar after cooking and then drizzled with a cream cheese glaze.

I was a little worried about not using thick cut slices for the French toast and how it would hold up, but it worked just fine. Instead of having to leave the thick slices in the egg mixture for a minute or so, I just dipped the bread in and took it out, with no soak time. The sweet bread makes a delicious French toast and pairs well with the cinnamon sugar coating. The cream cheese glaze just adds to the deliciousness of this French toast, so much so that I added, more than a drizzle.