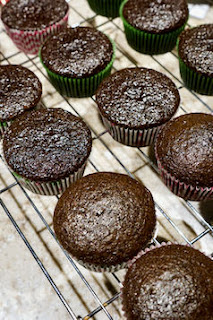 Whenever I am baking something at night to bring into work the next day, I always have this little fear that something won’t turn out right. Then I will either be up until late at night remaking the dessert or I will have to go to the store to get more ingredients or I will have to quickly come up with something else I can bake. 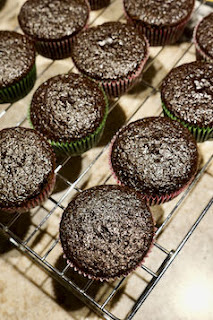 Well, it finally happened to me! I made chocolate cupcakes and I knew when I was adding the batter that the liners were too full, but the recipe said to divide the batter among 12 cupcake liners so I did against my better judgment. The end result was cupcakes that spread out over the liners and onto the top of the cupcake pan. The cupcakes tasted good, but the presentation was not good. I thought about just using them and finishing the recipe, but just couldn’t do it.

Since I had used up the last of my sour cream in that recipe I needed a new one and after a internet search it turns out that when filling chocolate cupcakes, you should never fill the liner more than 1/2 full. I usually fill them 3/4 full and the ones that I just baked I filled 2/3 full! I also found a new recipe that I had all the ingredients for so that saved me from having to go to the store. 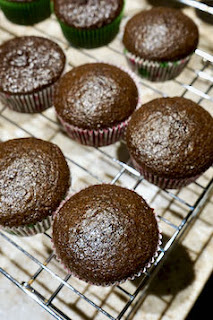 Normally when I make a new cupcake recipe I make the recipe as stated. So instead of using a cupcake recipe that I know works and tastes amazing. I use the one included in the recipe. However, to avoid a mistake again I need to have some go to cupcake recipes, like this chocolate one.

When I added the batter I did some of the cupcakes with 3 tablespoons and some with 4 tablespoons. If you look at the pictures, some have a dome and some are flat. The dome ones had 4 tablespoons of batter and flat top ones had 3 tablespoons of batter. So depending on how you want your cupcakes to look, will depend on how much batter to use. When baking cupcakes, keep in mind that different recipe will bake up differently and the amount of batter can vary. However, you can use this as a guide to start with. Baking does take trial and error and finding the right base recipes, just like this one.

These cupcakes are moist, sorry if you dislike this word, but it is the best way to describe these cupcakes and that is how my co-workers described them. They are easy to prepare and the espresso powder kicks up the chocolate flavor without adding any coffee flavor. Plus they bake up beautifully.

Check back later this week to see the cupcake recipe I used these cupcakes in. It is definitely a recipe you don’t want to miss.