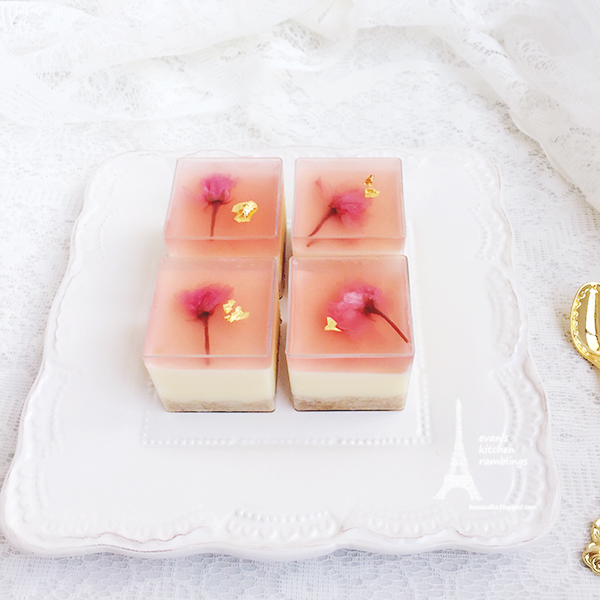 no matter where i’m at or how busy i’ve gotten, i always make it a point to make spring desserts. i love desserts associated with spring because of the beautiful colors and combinations. here i revisit a recipe that i made 4 years ago, the sakura white chocolate rare cheese dessert, with some slight tweaks. i remember this one being really popular with my readers and i got tons of people telling me how good it was. i wanted to go big initially ie. make an 8 inch one, or go real small. decided on the latter as i really wanted to use these cute square cups i bought recently. i think they look better than the round ones to be honest! 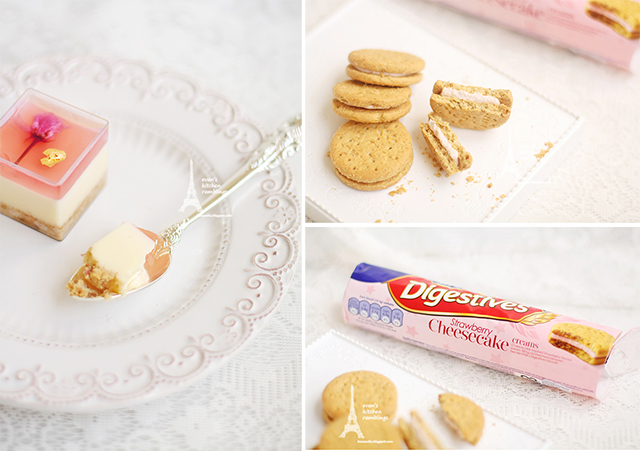 i also need to mention how much i love shopping at the dollar store recently. they’ve got tons of confections, snacks and chocolates not available at the mainstream grocery stores. in there i found tons of stuff, such as the bounty coconut chocolate, creme brulee and purple sweet potato kit kat, mint m&ms as well as these cheesecake flavored digestive/graham biscuits. i’m not usually a fan of grocery store cookies (i hate oreos), and the only kind i would eat are the lotus biscoff/speculoos, stroopwafels or the high end ones from marks & spencer, harrods or crabtree & evelyn so i was surprised i really liked these. the strawberry cheesecake flavored ones were pretty good, and i thought it would be great if i made the crust using these, cream and all. best decision i made so far. these were amazing! if you’re familiar with japanese desserts rolled out during spring time, strawberry and sakura seem to be one of the more popular pairings – such as the sakura strawberry mont blanc so i’m not surprised it worked beautifully. 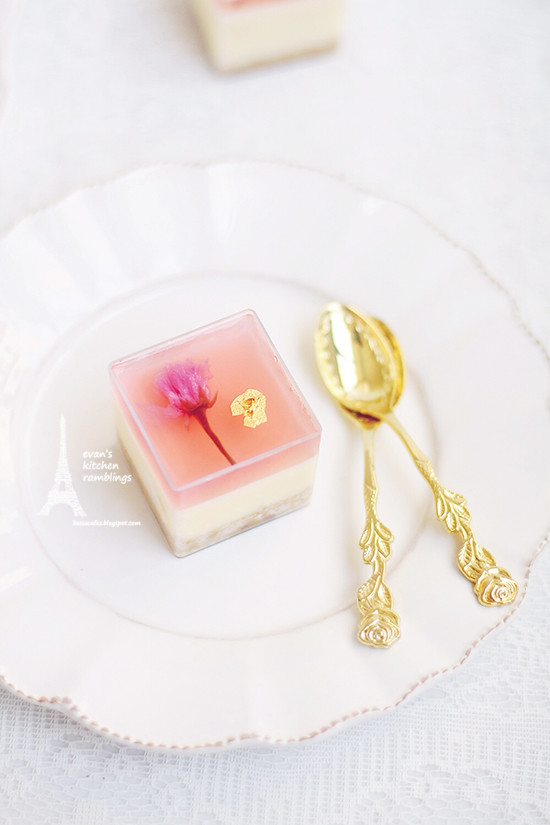 the dessert itself is as good as i remembered. even though this is a non-baked cheesecake, the use of egg yolk and white chocolate made it denser than the usual non-baked versions. some can be rather light on the palate, like the tofu cheesecake, but this is as close as you can get to a baked cheesecake, without the hassle of baking. the strawberry flavor from the crust is also quite prominent. and since i added the cream filling from the cookie as well, i only used half the butter. i also added slightly less sugar overall. since these cookies are smaller than the usual digestives, they’re also easier to break apart so its win win situation all around.

for the recipe, head over to my entry from 2012, i linked it to the original recipe from cookpad.